A Guide to Alcohol Addiction: : what it is, symptoms, how to treat it and benefits of alcohol rehab

Alcohol consumption has been a routine component of daily life throughout most of history. Unfortunately, daily consumption can lead to alcohol misuse and addiction. Alcohol rehab clinics exist to help those who have crossed the line from casual drinking to addiction.

The NHS defines alcohol misuse as drinking “in a way that’s harmful, or when you’re dependent on alcohol.” Drinking in excess of more than 14 units per week is considered misuse. A single unit of alcohol is equal to 8g or 10 ml of pure alcohol.

If you are concerned that you or a loved one has an alcohol problem, this guide is intended for you. It will discuss what alcohol addiction actually is, how it works, its symptoms, and more. Please contact us if you would like more information about alcohol rehab.

Alcohol addiction is sometimes referred to as alcohol dependence or alcoholism. All three terms essentially mean the same thing. If you are addicted to alcohol, you have become physically and/or psychologically dependent on it.

Physical dependence exists when a person’s body has become so used to alcohol in the system that it has trouble functioning normally without it. Psychological dependence exists when a person believes, in his or her mind, that he/she cannot function without regular access to drink. Alcoholics frequently believe that drinking is the only way to survive in the troubled world in which they find themselves. Their minds have tricked them into believing that alcohol is helping them rather than harming them.

It is generally accepted that a person is addicted to alcohol if he or she continues drinking despite knowing the harm it is doing. Addicts of all kinds persist in their destructive behaviour no matter how much it hurts them.

A person does not go to bed a casual drinker and wakes up the next morning an alcoholic. Alcohol addiction develops gradually based on a pattern of behaviour that starts with alcohol misuse. In the early stages, a person develops what is known as alcohol use disorder. This disorder is characterised by being preoccupied with alcohol, failing to control one’s drinking, binge drinking, and putting oneself in situations in which alcohol misuse can be dangerous.

If intervention is sought in the early stages of alcohol use disorder, more serious problems can usually be avoided. In the absence of intervention though, the disorder can easily lead to alcohol addiction.

Alcohol affects the way the brain operates. In people prone to alcohol addiction, drinking encourages the brain to release certain chemicals known as endorphins. These endorphins produce pleasurable feelings in the brain. The more a person drinks, the more he or she wants to feel the pleasure that accompanies it. Ultimately, alcohol’s effects begin to wane after time. A person must continually increase alcohol intake to produce the same feelings.

This is how addiction develops. Increased drinking to achieve the same pleasurable feelings puts a person on an unending cycle. Drinking more leads to wanting more. The more alcohol a person needs to achieve the same level of pleasure, the more likely it is that the individual will eventually become addicted.

Why Alcohol Is Addictive?

Alcohol is addictive because of the endorphin issue. Understand that alcohol is a drug even though we tend to think of it separately from drugs like heroin and cocaine. It is a drug that affects everything from how the brain works to a variety of physical functions, including heart rate and respiration.

The addictive nature of alcohol rests in the pleasurable feelings it creates and how quickly those feelings wear off. As with most addictions, the body can compensate for a certain amount of alcohol in the bloodstream. The more frequently a person drinks, the more easily the body accommodates it. This is the mechanism behind addiction.

As a person’s body gets used to a certain amount of alcohol, drinking no longer produces the same amount of pleasure. The person must consume more alcohol to solve that problem. His or her body will eventually get use to this new level of alcohol, prompting the drinker to consume even more. It is the combination of alcohol’s pleasure-inducing properties and the body’s natural ability to adapt that makes alcohol addictive. 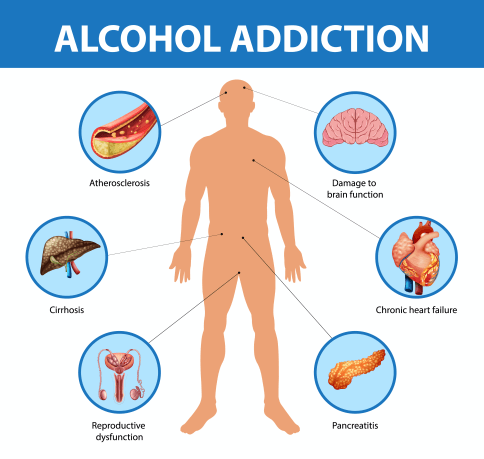 You or a loved one may suffer from alcoholism if the following symptoms are present:

Some people try to self-treat alcohol addiction by gradually reducing the amount of alcohol they consume. That is certainly an option, but it doesn’t work for everyone. Some alcoholics need professional treatment through the NHS or a private alcohol rehab clinic.

We generally recommend alcohol rehab in a private setting. It offers a number of benefits, starting with full medical supervision throughout the patient’s rehab programme. Medical supervision increases the chances of a full and complete recovery. 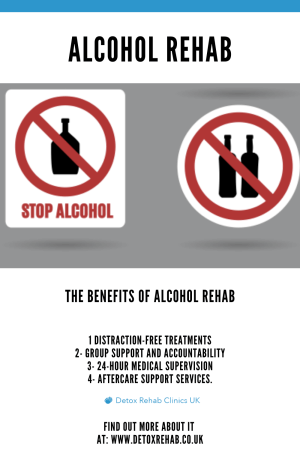 Alcohol addiction is a serious matter requiring medical treatment. We encourage you to seek help for yourself or a loved one exhibiting signs of alcoholism. Left untreated, it can lead to all sorts of serious health issues – and even death.